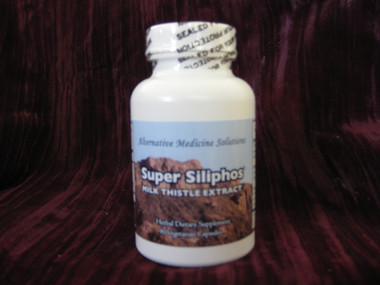 Super Siliphos® Benefits:
·        Maximize your liver protection against alcohol, pollutants and all forms of toxins with an even higher dose of Silybin Phytosome than Maximum Milk Thistle®.
·        Scientifically proven to be up to 10x more absorbable & up to 20x more effective than standard milk thistle formulas.
·        Regenerates healthy liver cells to replace those you've lost.
·        Produces faster functional and structural rebuilding of liver tissue and cells than standard milk thistle formulas.
·        Supports your liver's function in fat, carbohydrate and protein metabolism, and storage of vitamins and minerals.
·        Gluten free

Bastyr University: The Bastyr Clinic is treating and monitoring patients in order to “evaluate a science based naturopathic medical protocol for the treatment of people”. The protocol calls for 360mg of Siliphos ®  – the exact dosage found in SuperSiliphos.??Clinical Studies: Pharmacological and toxicological results, added to those found from pharmacokinetic studies, have provided the basis for clinical testing of SILIPHOS ® .

Clinical studies have been performed to evaluate the properties of this new complex in subjects with “pathological” impairment of liver function. The results, including the optimal tolerability obtained in these “extreme” clinical situations, give strong support for the use of SILIPHOS ® for all liver concerns.

What is the evidence to support the claim that SILIPHOS is better?
Several human and animal studies have shown SILIPHOS ® is better absorbed. In one study, the excretion of silybin in the bile was evaluated in patients undergoing gallbladder removal because of gallstones. A special drainage tube, the T-tube, was used to get the samples of bile necessary. Patients were given either a single dose of the SILIPHOS ® or silymarin. The amount of silybin recovered in the bile within 48 hours was 11% for the SILIPHOS ® group and 3% for the silymarin group.

In another study designed to assess the absorption of SILIPHOS ®, plasma silybin levels were determined after administration of single oral doses of SILIPHOS ® and a similar amount of silymarin to 9 healthy volunteers. The authors concluded SILIPHOS ® was absorbed roughly 7 times greater than regular milk thistle extracts standardized to contain 70-80% silymarin.

Available to clients online ONLY through Alternative AMedicine Solutions, inc.
SuperSiliphos is 8-10 times more absorbable than ANY 80% standardized milk thistle extract.
Milligram for milligram SuperSiliphos costs one quarter as much as any other silybin phytosome.

SILIPHOS® is a patented botanical derivative from Silybum marianum (L.) Gaertn. Commonly referred to as milk thistle, the plant has been used for centuries to address liver health. SILIPHOS® is an Indena Phytosome ingredient in which silybin, the active principle in milk thistle, is associated with soy phospholipids to significantly improve bioavailibility.

Toward the Definition of the Mechanism of Action of Silymarin: Activities Related to Cellular Protection From Toxic Damage Induced by Chemotherapy

Silymarin as a Natural Antioxidant: An Overview of the Current Evidence and Perspectives

Silymarin and hepatocellular carcinoma: a systematic, comprehensive, and critical review

Silymarin and Epithelial Cancer Chemoprevention: How close we are to bedside?

Silybin and the liver: From basic research to clinical practice