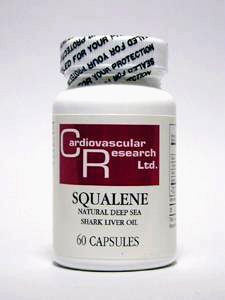 Directions
Take one to three capsules daily with meals, or as directed by a physician.

Warning
Store in a cool, dry place to insure freshness. KEEP OUT OF THE REACH OF CHILDREN.

Cell-Invigorating
Squalene revitalizes weakened body cells and helps revive cell generation. Its chief attribute is the protection it affords cells from oxidation reactions.
The human body has about 6 billion oxygen reliant cells. Oxygenation promotes good health to the most basic level of life - the cell.

Purifying
Squalene helps clean, purify, and detoxify the blood from toxins, facilitating blood circulation. It cleanses the gastrointestinal tract and kidneys, causing better bowel movement and urination. Many diseases are cured if the blood is purified, a condition Squalene contributes to.

Curbing of Bad Cholesterol
Squalene is good cholesterol that is made up of high density lipid (HDL) which prevents the hardening of blood vessels and deposition of cholesterol plaques.
To test the authenticity of pure Squalene, you can place the deep-sea shark liver oil extract in the freezer. Even at low temperatures, it should not freeze, allowing the substance to flow freely into your system, pumping oxygen into the cells.

Oxygen Control
Squalene carries oxygen in the cellular level, causing further improvement in organ function through cellular metabolism, preventing the acidotic cell syndrome where cells become acidic, deteriorate and die due to lack of oxygen.
There is a significant relationship between the degree of one's health and the amount of oxygen consumption by body cells.
In today's polluted environment, lack of exercise, and poor lifestyle, Squalene gives your body a beneficial source of oxygen.

The miraculous essential omega 2 oil. Secrets from the sea

Scientists have discovered that in the very beginning of life on Earth, about 3,5 billion years ago, microbes and later in the Precambrian period membrane cells of organisms were full of squalene. At that time the substance was apparently essential for their survival in a hostile environment with a lack of oxygen.

Until recently no one knew that this natural chemical is also found in small amounts in the human body. Newborn babies show the highest content of squalene in their blood.

With an age between 30 and 40 the stock of squalene in our body decreases strongly. It is not surprising that in this stage of life record performances of sportsmen take place in a lesser degree.

The deep sea shark, a prehistoric animal, dispose of an enormous concentration of squalene in his liver. Through the ages fishermen all over the world were acquainted with the beneficial and wonderworking effects of this liver oil of a number of deep-sea sharks living beneath 1000 m.

The local people on the Japanese peninsula of Izu called the substance already for centuries "Samedawa" or a cure-all. They used it for a wide range of diseases from constipation to cancer. In ancient China the miraculous effects of shark liver oil are recorded for posterity in the pharmaceutical book of "Honzukomuko".

Except squalene, the liver oil of the deep see shark contains vitamin A, D3 and E, Jodium and alcohol, as well as alcoxyglycerols and other immunity enhancing nutritional substances. As it turns out now the synergetic effect of squalene together with the other components improve not only the sharks immunity against cancer and other diseases, but supports the animal with an increased endurance.

Health as well as dysbalance of our body has its origin on the cellular level. A wide range of squalene’s core properties influence this level. Therefore it find a wide application: