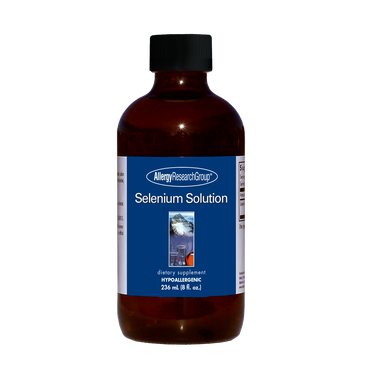 Selenium was discovered in 1817 and named after Selene, the Greek Goddess of the Moon

Selenium Solution is specially formulated for individuals who are hypersensitive. It provides sodium selenite, which is a very pure selenium source. Sodium selenite is well absorbed, and its sodium content is nutritionally insignificant.

Selenium Solution is prepared by dissolving sodium selenite into triple distilled water, then sterilizing the solution by the use of heat rather than by the addition of chemical preservatives. Selenium Solution is therefore best stored refrigerated after the bottle has been opened. Individuals who are highly chemically sensitive may want to use Selenium Solution at an appropriate level of dilution to gradually build up their tolerance.

The nutrient is of the purest and highest quality obtainable without the addition of diluents, preservatives or artificiial additives. Appropriate for food-sensitive individuals.

Contains sodium selenite.
CAUTION: Do not exceed 400 micrograms of Selenium per day from all sources

Selenium is trace mineral  essential for good health, selenium is  required  in small amounts. Selenium is incorporated into proteins to make selenoproteins, important antioxidant enzymes. Selenoproteins help prevent cellular damage from free radicals, a major threat to the liver in people who have Hepatitis C.  Selenium is needed for proper immune system function, thyroid function and cancer prevention. People who have hepatitis C develop 8 times more cancer than others and one reason is depleted selenium.

The November 2011 edition of the journal Nutrition Research, Japanese researchers investigated the relationship between selenium, Hepatitis C and insulin resistance. They found that the degree of selenium deficiency correlated with the amount of liver damage in patients with chronic Hepatitis C. In addition, they concluded that selenium deficiency was likely a factor contributing to insulin resistance in affected individuals.

The March-April 2012 edition of the Saudi Journal of Gastroenterology, Pakistani researchers evaluated blood selenium concentrations in patients with Hepatitis B and Hepatitis C. Their results indicated that healthy individuals had greater blood selenium concentrations than those with Hepatitis B or C. Additionally, they found that levels of selenium were notably lower in those with more severe liver disease. Based on these findings, the researchers suggested selenium supplementation in patients with advanced liver disease from Hepatitis B or C to optimize nutritional support and get a better treatment response.

I am pleased that some officials are now advocating doing what I have been preaching for the last 20 years.