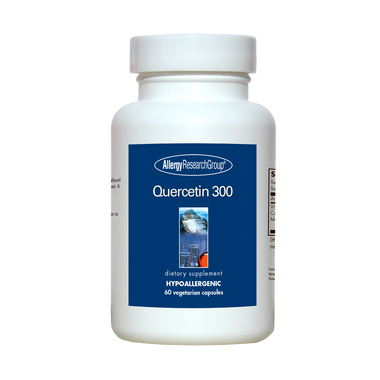 This formulation incorporates the highest potency quercetin available, derived from a non-citrus, hypoallergenic plant source, and stabilized with additional antioxidants so as not to auto-oxidize (degrade spontaneously). Quercetin has been shown to support the integrity of mast cells, which play a key role in controlling the release of histamine.* In addition, Quercetin has been shown to reduce the production of prostaglandins and leukotrienes.*

Suggested Use: As a dietary supplement, 1 or 2 capsules one to three times daily with meals, or as directed by a health practitioner.

These nutrients are of the highest quality and purity obtainable, free of all common allergens (antigens), and do not contain preservatives, diluents, or artificial additives.

Quercitin Studies in the News

What Experts are Saying About Quercetin:

“Indicators suggest quercetin may help performance in athletes and may helpalso improve our cognitive performance, or brain alertness. I strongly encourage you to look into quercetin.”

“Quercetin exerts strong anti-oxidative, anti-inflammatory, anti-pathogenic,and immune regulatory effects in vitro and in animal-based studies.Epidemiological data indicates reduced rates of cardiovascular disease and various types of cancer in groups self-selecting diets high in Quercetin. In human studies, quercetin has shown to lower blood pressure, and in athletes it significantly reduces the incidence of the common cold, especially during periods of heavy training and race competition"

“Quercetin is a most promising compound for disease prevention and therapy.”

“DARPA researchers have identified a very safe, natural antioxidant – called Quercetin – and developed it into a new form that is now available to the military and the general public. Among Quercetin’s many potential benefits is illness prevention. In a randomized, placebo-controlled study, Quercetin helped prevent viral illnesses, like colds and flu, after physical exertion. Following a strenuous 3-day exercise routine, 50 percent of the control group became ill with colds and flu, whereas only five percent of the Quercetin supplemented group did. This important immune protective effect will help keep our war fighters healthy during training and deployment.

For additional published abstracts on quercetin in academic, peer reviewed journals, go to PubMed and search for “quercetin”.

This site is intended to educate and provide information on quercetin and its benefits as a healthy addition to one's nutritional regime. While there is promising research being conducted in a variety of areas, at this time quercetin is not approved by the FDA to be used for the prevention or treatment for any diseases.

Quercetin’s Athletic Performance Properties
Quercetin has been shown to enhance performance in two double blind, placebo-controlled crossover studies on cyclists. The first one was done using a quercetin-containing beverage at Pepperdine University by Dr. Holden MacRae. Elite cyclists over a 3-week period on a simulated 30km mountainous time trial showed a 3.1% improvement in time when they consumed the quercetin product over the placebo. Dr. MacRae said of the results, “Exercise performance changes of 1-4% are significant and usually mean the difference between winning and losing. Changes of this magnitude are typically achieved in athletes only by blood doping or living at high altitude.” A second study examined the effects of 14 days of supplementation with quercetin at 1,000 mg per day on 26 untrained adult males. Results showed a statistically significant increase in quercetin blood plasma levels, and a 2.9% improvement in treadmill time trial performance and a non-significant directional increase of 4.1% in muscle mitochondria DNA compared to the control.

Quercetin’s Upper Respiratory Tract Infection Properties
A randomized, double blind, placebo controlled clinical study at Appalachian State showed that the antioxidant quercetin significantly reduced incidence of upper respiratory tract illness during the two-week period following intensified exercise. Forty test subjects were subjected to extreme physical stress during a five-week period. Half were given 1,000 mg of quercetin daily and half were given a placebo. While markers of immunity did not differ significantly between the quercetin and placebo groups, in the quercetin group, the incidence of upper respiratory tract infection was significantly reduced (1 out of 20), while in the placebo group, 9 out of 20 athletes experienced infection.

Quercetin’s Anti-inflammatory Effects
Quercetin has been found to be a powerful anti-inflammatory. Inflammation in the body leads to many health ailments and diseases. Arthritis is caused by inflammation between the joints. A report in the 2008 issue of the "Journal of Pre-Clinical and Clinical Research" (JPCCR) states that quercetin acts quickly within the body and can ease arthritis pain within two to three days. (The amount of quercetin in this study was 750 mg daily, provided through supplements.) A study in the July 2008 medical journal "Metabolism" verifies the JPCCR report that quercetin is an anti-inflammatory, stating that it is found to be effective in reducing signs of inflammation within the blood.

Quercetin’s Anti-Histamine and Anti-Allergy Properties
The American Academy of Family Physicians describes histamines as substances that irritate the cells in the body. This is why they cause sneezing, itching, and other allergy type reactions. An antihistamine prevents these symptoms by not allowing histamines to attach to and irritate the cells. The University of Maryland Medical Center reports that, in test tube studies, quercetin is shown to prevent the release of histamines.

Quercetin’s Anti-Carcinogenic Properties
Quercetin has been found to both treat and prevent cancers in certain studies. The June 11, 2009 issue of the "Journal of Experimental and Clinical Cancer Research" showed that quercetin is found to be protective against the formation of liver cancer cells, mainly due to its role as an antioxidant. Quercetin is also found to treat cancer by causing apoptosis, or "cell death," as reported in the May 18, 2009 edition of the medical journal, "Phytotherapy Research." While these studies are promising, most have been performed on mice and rats but not on humans. The American Cancer Society (ACS) reports a human study in which the combination of quercetin and curcumin supplements decrease the size and quantity of rectal tumors. The stand of the ACS is that they would like to see more clinical trials on the effects of quercetin on cancer in humans before recommending supplements. However, they do promote adding quercetin to the diet by increasing your daily intake of fresh fruit and vegetables.

Quercetin’s Cardiovascular Protection Properties
Quercetin is known to have protective benefits when it comes to heart disease. The April 4, 2008 edition of the “Journal of Biological Chemistry” reports a study that shows the powerful action of quercetin against cardiovascular disease. In this study, they find that quercetin goes directly to the areas of the arteries that are injured or inflamed, while passing over healthy areas. The University of Maryland Medical Center also reports that quercetin may protect against the build up of plaque in the arteries and the LDL (bad) cholesterol damage.

Epidemiological studies have shown reduced long-term mortality from coronary heart disease in those who consume diets high in flavonoids- including quercetin, anthocyanins and catechins. In the Zutphen Elderly Study, for example, researchers evaluated the diets of 805 Danish men between the ages of 65 and 84. These men were then followed up for five years. It was found that the men who took in the most flavonoids were slightly less than half as likely to have suffered a heart attack during the course of the study. Moreover, intake of flavonoids, mainly quercetin, was inversely associated with stroke. Men with the lowest flavonoid intake (bottom quartile) were almost four times as likely to suffer a stroke as men with the highest intake (top quartile). Quercetin battles cardiovascular disease along multiple fronts. Its anti-thrombotic action helps prevent the proclotting state that sets the stage for cardiovascular disease and major cardiovascular events.

Properties Against Thrombosis
Laboratory experiments suggest that quercetin has the remarkable ability to prevent thrombus formation and to disperse thrombi that have already formed in blood vessels. A thrombus (the plural is "thrombi") is an aggregation of platelets, fibrin and other blood factors, frequently causing obstruction of a blood vessel. Researchers demonstrated that a low concentration of quercetin suppressed thrombus deposits on collagen bathed in a stream of blood. The researchers also tested quercetin in a model used to study interactions between platelets and the endothelium (inner blood vessel wall). When the blood flowing over a piece of rabbit aorta contained a low concentration of quercetin, platelet thrombi dissolved. The researchers concluded that quercein exerts its anti-thrombotic effect by binding selectively to platelet thrombi on blood vessel walls, and by restoring normal synthesis of endothelium-derived relaxing factor and prostacyclin.

Longevity Properties
The diverse and multiple effects of quercetin on specific disease processes are overwhelming, and are certain to have an effect on longevity simply by reducing the impact of chronic illness. But there seems to be something else going on with this surprising polyphenol—something independent of its disease-preventing activity. Hard as it may be to believe, there is actually evidence that quercetin has a direct effect on prolonging life span, at least in simple laboratory organisms. For example, a Portuguese biochemistry research group has shown that, by increasing resistance to oxidative stress, quercetin supplements prolong the life span of laboratory yeast cells in culture by 60%.