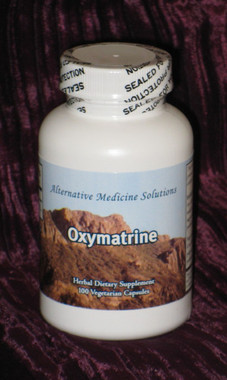 Now made in the USA with vegetarian capsules

Oxymatrine will be available approximately Mid JUNE. If you purchase now we will ship your order the day it arrives.

Matrine and oxymatrine are the two major alkaloid components found in sophora roots. They are obtained primarily from Sophora japonica(kushen), but also from Sophora subprostrata (shandougen), and from the above ground portion of Sophora alopecuroides. The matrines were first isolated and identified in 1958; they are unique tetracyclo-quinolizindine alkaloids (see Figure 1) found only in Sophora species thus far. An intensive investigation into the pharmacology and clinical applications of these alkaloids has gone on for the past decade and remains one of the focal points of Chinese medical research. The main clinical applications are treatment of people with cancer, viral hepatitis, cardiac diseases (such as viral myocarditis), and skin diseases (such as psoriasis and eczema).

The crude herb and crude hot-water extracts of sophora have been available in the West for more than 25 years. An alkaloid fraction of sophora roots containing a standardized level of oxymatrine and matrine (20%) was first introduced by the Institute for Traditional Medicine, and made available to practitioners in tablet form under the name Oxymatrine (White Tiger) in 1998. It has been used without reported side effects. In China, the alkaloids are often given by injection, but this method of administration is not acceptable in the West, so oral dosing is used here instead. When taken orally, much of the oxymatrine is converted to matrine; to get high blood levels of oxymatrine, it must be given by injection. However, it is unclear whether oxymatrine is clinically more effective than matrine. Chinese researchers have also used the alkaloids in capsule form, with results that appear similar to the injection. Sophora is also administered in complex formulas made as decoctions and taken orally.

Sophora japonica contains about a dozen alkaloids, with matrine and oxymatrine being by far the highest, together comprising about 2% of the dried root stock (most of it in the form of oxymatrine), followed by closely related alkaloids: mainly sophocarpine, but also minute amounts of sophoranol, sophoramine, sophoridine, allomatrine, isomatrine, and others (see Figure 2). These alkaloids were first reported as constituents of kushen in a series of publications from 1958-1978.

As described by Chen Yanxi and his colleagues at the Shanghai Second Medical University (1):

In recent years, oxymatrine has been recommended for treating chronic hepatitis B and chronic hepatitis C and has been shown effective in clinical practice. It has been utilized for these applications broadly, but the factors affecting its efficacy have not yet been determined.

Chen and his group gave oxymatrine injection to patients with hepatitis B. He confirmed that the viral load declined by this treatment, suggesting that oxymatrine served to inhibit the viral replication, not just reduce liver damage, which is the primary and more limited effect of many herbs used for hepatitis. Antiviral activity, for hepatitis C virus, was confirmed by the same group in cell culture tests (2). Clinical effectiveness for patients with hepatitis C had been reported earlier, including reduction of viral load (3). Oxymatrine may reduce death of liver cells damaged by means other than by inhibiting viral activity, as indicated in a pharmacology study of liver protective effects in immune-based liver damage (4).

Kang Junjie and Kang Suqiong, at the Treatment Center for Hepatic Diseases of the Amoy Municipal Hospital, reported that oxymatrine injection did not cause side effects other than rare local reactions at the injection site (5). They used this injection along with oral administration of complex Chinese herb formulas designed to match symptom-sign complexes and claimed that the effects were comparable to those attained with interferon therapy, except that adverse reactions were avoided. In particular, they claimed that the use of oxymatrine and Chinese herb formulas inhibited liver fibrosis (for further information on Chinese herbs for this purpose, see: Treatment and prevention of liver fibrosis). The inhibition of fibrosis appears to be a separate for additional function of sophora alkaloids beyond inhibiting viral activity. In laboratory animal studies carried out by Chen Weizhong and his colleagues at the Changzheng Hospital in Shanghai, matrine was shown to reduce the formation of liver fibrosis that was caused by chemical damage to the liver (6).

Thus, in relation to viral hepatitis, the sophora alkaloids appear to inhibit the viral replication, reduce destruction of liver cells, and protect against fibrosis. It has also been suggested that the alkaloids promote the flow of bile.

Oxymatrine, an isolated extract from traditional Chinese herb Sophora Flavescens Ait, has been traditionally used for therapy of anti-hepatitis B virus, anti-inflammation and anti-anaphylaxis. The present study was to investigate the anti-cancer effect of oxymatrine on human pancreatic cancer PANC-1 cells, and its possible molecular mechanism.

The effect of oxymatrine on the viability and apoptosis was examined by methyl thiazolyl tetrazolium and flow cytometry analysis. The expression of Bax, Bcl-2, Bcl-x (L/S), Bid, Bad, HIAP-1, HIAP-2, XIAP, NAIP, Livin and Survivin genes was accessed by RT-PCR. The levels of cytochrome c and caspase 3 protein were assessed by Western blotting.

Oxymatrine inhibited cell viability and induced apoptosis of PANC-1 cells in a time- and dose-dependent manner. This was accompanied by down-regulated expression of Livin and Survivin genes while the Bax/Bcl-2 ratio was upregulated. Furthermore, oxymatrine treatment led to the release of cytochrome c and activation of caspase-3 proteins.

Oxymatrine can induce apoptotic cell death of human pancreatic cancer, which might be attributed to the regulation of Bcl-2 and IAP families, release of mitochondrial cytochrome c and activation of caspase-3.