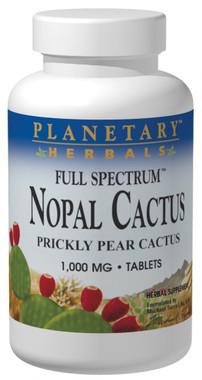 Nopal, also known as prickly pear cactus, has been one of the most important botanicals consumed as a health-promoting food for centuries. The cactus contains a wide array of beneficial compounds, including antioxidants that are important for overall health. Our Full Spectrum Nopal Cactus consists of flesh of the cactus "leaf", also called stem or pad, for a full spectrum of nopal activity.

The nopal cactus, with its large, paddlelike leaves, bright red fruit, and luxurious flowers, grows wild and is cultivated in gardens throughout the Southwestern U.S. and Mexico. Also known as prickly pear cactus, the nopal is not only a mythic symbol of strength and health, it is an important, nutritious food and it has been used for centuries in traditional herbalism. Current studies now show that it is an effective means of supporting healthy glucose levels, when combined with a healthy diet and exercise program.

The benefits of nopal cactus (Opuntia spp.) come at a time when many American diets contain high amounts of refined carbohydrates and sugars. Blood sugar balance affects the health of the kidneys, heart, eyes, and the entire body.

Many centuries ago, the ancient Aztecs of Mexico were a nomadic people - unsettled and poor. The legends say that one day, one of their leaders had a vision. He was told that the people should settle, and if they did, they would thrive. They would know where to settle when they saw a sign: an eagle with a snake in its talons, perched on a nopal cactus. Roaming central Mexico, the people saw the sign in a location now known as Mexico City. They settled there and they did thrive, creating one of the most advanced civilizations in the Western Hemisphere. The nopal is still legendary in Central and South America. The eagle, snake and nopal cactus adorn the flag of Mexico.

The leaves of the nopal are widely consumed as a vegetable, similar in taste to asparagus, and the red, pear-shaped fruit is used to make jams, jellies and other desserts. Herbalists have used nopal leaves topically for centuries.

Animal and human studies in both Mexico and the US have shown nopal cactus to have blood sugar balancing qualities. Further studies have found that extracts of nopal also help balance fluids and electrolytes, two areas that are often affected when blood sugar is imbalanced.

Method of Action
Nopal's effectiveness is said to be related to its unique evolutionary history. Cacti are descendants of leafy trees, but during their evolution have had to adapt to extremely dry, hot deserts. The cacti rely on stembased photosynthesis, and their epidermis must remain functional for years, as the cells regulate water and nutrients in an enclosed system. The cactus must survive dry, searing temperatures, so it developed special compounds called polysaccharides. These compounds cover a wound to the cactus with a slimy film that turns into a tough impermeable seal, protecting the plant from the shock of excessive heat.

The nopal's polysaccharides, along with its pectins and mucilages, slow down intestinal transit and absorption of sugar, thereby supporting healthy glucose levels. The cactus also contains substantial levels of beta-carotene and vitamin C, which also have antioxidant properties.

Warning: Do not use if you are pregnant, may become pregnant, or breastfeeding. If you are taking hypoglycemic drugs for diabetes consult your physician before using this product.
Do not use if either tamper-evident seal is broken or missing. Keep out of the reach of children.
Store in a cool, dry place.

Suggested Use: 1 tablet daily with a meal. Take with a full 8 ounces of water or liquid.

All prices are in USD Copyright 2021 Alternative Medicine Solution. Sitemap |