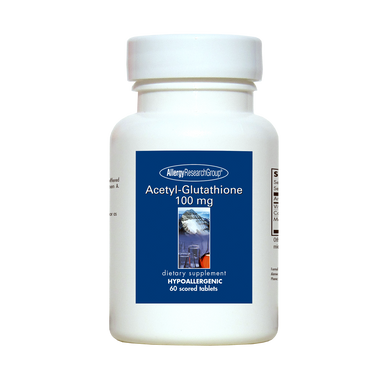 Acetyl-Glutathione is a novel oral glutathione formulation that is stable in the stomach and gastrointestinal tract, well absorbed, and able to enter the cells directly and present to the cytosol for mitochondrial entry.*

Suggested use: As a dietary supplement, 1 tablet two times daily, or as directed by a healthcare professional.

Glutathione is known as the master antioxidant and highly active in human lungs and many other organ systems and tissues. It has many reported uses. It has a critical role in protecting cells from oxidative stress and maintaining the immune system. Higher blood levels of glutathione have been associated with better health.

Glutathione supports the body's immune system by fighting off invaders, including cancer cells. A body with sufficient glutathione fights off these threats more easily.

Orally administered glutathione (usually capsules or foul-smelling/tasting liquids) has not been proven to raise glutathione levels in cells throughout the body.

Glutathione or GSH is the most important and powerful intracellular anti-oxidant that the body makes!

What is glutathione? Glutathione is a tripeptide molecule made inside cells from the amino acids L-glutamine, L-cysteine and L-glycine. The sulfur atom in L-cysteine is what binds heavy metals and toxins and aids in their removal from the body. Glutathione is also very crucial for proper mitochondrial function and energy production. Glutathione is also needed to protect DNA from damage. Many individuals with chronic illness (chronic infections (i.e. herpes, HIV, Lyme's disease), chronic fatigue, fibromyalgia, heavy metal toxicity, candida overgrowth, etc.) have very low levels of glutathione in their tissues. Heavy metals (i.e. mercury, lead, cadmium) not only cause the body's tissues to use up their supply of glutathione, but they also "directly" inhibit the production of more glutathione by displacing magnesium from the enzyme that makes glutathione! Also, as we get older, our bodies ability to make glutathione declines.

So why not just supplement glutathione to boost the body's levels of glutathione and help restore better health. This has been tried, but once glutathione reaches the stomach it is rapidly degraded and is of no use. Some people have supplemented pre-cursors to glutathione i.e. N-acetyl-cysteine (called NAC for short) to provide the body with the most crucial amino acid needed to make glutathione. But remember some individuals are not able to synthesize glutathione very well due to heavy metal toxicity and/or magnesium deficiencies. Also, NAC is very smelly due to the sulfur atom. If you pass gas while taking NAC, please be prepared to warn others of the horrible smell that is coming their way (i.e. rotten eggs)! Some doctors administer glutathione intravenously. This method works, but obviously it involves a lot of expense given the office visit and the cost of the I.V.